A comparison of April 2008 with that of 2007 shows that new listings decreased 11.7% Closed sales were down 35.8%, while pending sales fell 34.2%. At the month's rate of sales the 2,252 active residential listings woulds last approximately 9.5 months. However based on the chart below houses for the month of April are staying on the market for less days in comparison to the last 5 months. For Further information Please click on the following link: http://www.web2real.com/2008AprilLaneMarketAction.pdf

Posted by Team Wickham at 12:37 PM No comments:

Please visit the following link to view the May Realty Times news letter.

http://realtytimes.com/nlnews.htm?open&Vol=c&ID=sallyjostevewickham
Posted by Team Wickham at 12:25 PM No comments:

Here's how a top mortgage industry economist sees conditions in the market at the moment: It's all kind of "flat", says Orawin, senior forecast economist for the Mortgage Bankers Association of America.
What Dr. Velz was referring to were the latest big-picture, "macro" numbers on the U.S. economy that underpin the housing market: The gross domestic product or GDP -- all the goods and services generated in the national economy -- registered a zero point six (0.6) growth rate in the first quarter.
No question that's pretty anemic. But it's better than the negative growth predictions that had been made by many Wall Street analysts.
In the latest month, manufacturing production was better than just about anybody expected -- factory orders jumped by 1.4 percent in March. No big deal you say? Well maybe, but it was the first increase in factory orders we've seen in the last three months.
The employment picture was also better than projected. The US economy lost 20,000 jobs in the most recent month, which is not good. But Wall Street had forecast an 80,000 job loss number -- and the stock market took a nice bounce on the news of the smaller loss.
Plus, the national unemployment rate dropped to 5 percent from 5.1 percent.
On top of all this, the Federal Reserve did precisely what most analysts expected -- cut the short-term federal funds rate by another quarter of a point.
Now that doesn't translate into lower 30-year mortgage rates, but it is very welcome news for millions of people with home equity credit lines and adjustable-rate mortgages heading for payment resets.
The fed funds rate is now at 2 percent, and the prime bank rate is just 5 percent - which is outstanding -- and should eventually have a stimulative effect throughout the economy.
Mortgage rates also fell slightly last week. Average thirty year rates inched downward to 6.01 percent, according to the Mortgage Bankers, and 15 year rates averaged 5.5 percent.
All in all, things could be worse. And they could be better. We are all paying horrendous gas and food prices and that psychology diminishes consumers' appetites to buy and sell houses.
On the other hand, the underlying US economy is defying the pundits, hanging in there like a boxer who refuses to go down. Home prices and the cost of money are more affordable, and a number of local real estate markets are picking up on that combination -- and improving.
So: the economy may be flat. But considering the alternatives, flat looks relatively favorable at the moment.

Market Predictions for the State of Oregon

The following article is gleaned from http://www.housingpredictor.com/oregon.html.

New businesses moving to the state produced record high home prices in Oregon, but the times have been changing in Oregon real estate. Housing sales have slacked off. Home auctions are becoming more common place and the once burgeoning economy is beginning to weaken.
Oregon has been high on the list with many appreciating housing markets for more than three years, but the boom days are long over. A glut of unsold homes is depressing prices, and the growing inventory will have a major impact on the state’s markets, according to the Housing Predictor forecast.
Don’t look for Oregon housing markets to crash any time soon, however, as newcomers continue to move to Oregon for jobs and buy homes to have a roof over their heads.
In Eugene, which has exploded with growth in the last five years with new developments, the housing market has also slowed. But a major new employer is moving to Eugene to supply a breath of fresh air to the economy.
The housing slow down has resulted in layoffs at lumber companies, which is one of the region’s largest employers. The down turn has effected the area’s home prices, and is readying to send Eugene homes 8.0% lower in 2008, Housing Predictor forecasts.
Posted by Team Wickham at 1:05 PM No comments: Looking at March 2008 compared with March 2007, the number of new listings decreased 9.5%. Additionally the number of closed sales declined 29.1% and the pending sales decreased 28.7%. At the month's rate of sales the 2,074 active listings would last 8.4 months.
This is a Decrease in Inventory from the beginning of the year when it was at 10.2 compared to 2006 when themarket was still hot with an inventory of 3.8. Posted by Team Wickham at 1:19 PM No comments: 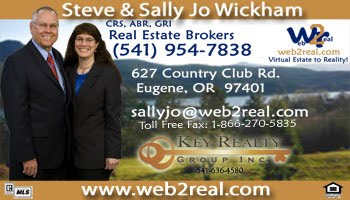